A Time to Laugh

The African chieftain was so merciful that, when he ascended to power, he forbade the killing of all animals. Not long thereafter, the lion and cheetah population began to get out of hand, and, starving in the wilds, they began feeding on humans.

Before long, even the antelope and zebra were so plentiful that they began nibbling on natives. The terrified populace petitioned their leader to rescind his edict, but he refused: thus, they had no choice but to overthrow the chief.

Not only was the revolt successful, it went down in history as the first time in the memory of mankind that a reign was called on account of game.

A businessman who needed millions of dollars to clinch an important deal went to church to pray for the money. By chance he knelt next to a man who was praying for $100 to pay an urgent debt.

The businessman took out his wallet and pressed $100 into the other man's hand. Overjoyed, the man got up and left the church.

The businessman then closed his eyes and prayed, "And now, Lord, that I have your undivided attention..."

During a January revival an evangelist asked the people in line what they needed.

One man's request was for his hearing. The evangelist spit on his finger, put it in the man's ear, prayed for him and asked him, "How's your hearing now?" 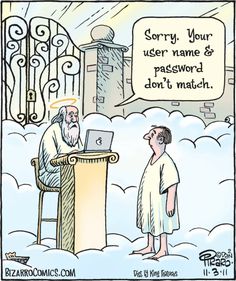